Get HIARCS Chess for iPad from the App Store today! 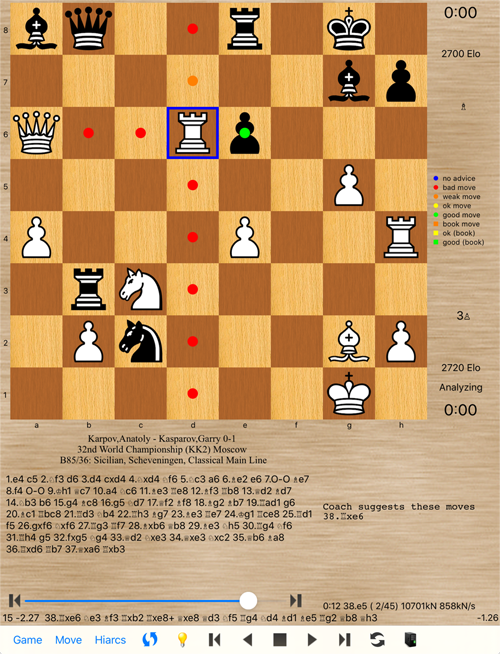 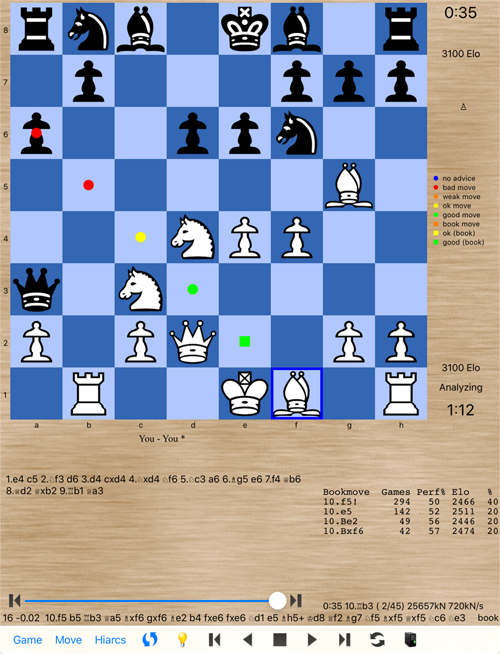 HIARCS Chess for iPad is a multiple World Championship winning chess program that has proven to be the strongest chess program on Palm and Pocket PC devices and is available for the iPhone and iPod Touch. HIARCS 13.3 for iPhone represents a major update of functionality and chess strength offering a huge range of features for all players from beginners to Super Grandmasters.

HIARCS Chess for iPad is the only handheld chess program in the world which has won Grandmaster tournaments. In August 2009 it won the Mescusor Cup in Buenos Aires, Argentina ahead of Grandmasters, while scoring an incredible undefeated 9½/10 points (9 wins, one draw). This is a performance of 2938 Elo which is the best chess performance rating for any handheld device in history and higher than Garry Kasparov's peak Elo rating!

HIARCS also has the second and third best ever chess performances on handhelds as well having won two other Grandmaster tournaments. It also has many match wins over Grandmasters in the past 4 years on handheld devices!

Even the World's strongest ever human chess player, Garry Kasparov, said "HIARCS is much better positionally than Deep Blue" and even the current World champion, Vishy Anand, in a recent interview when asked what chess program he uses to analyse with said "generally I use HIARCS".

This power enables your iPhone to play chess like a super Grandmaster, analyse games and chess problems with you, or play at whatever chess strength you want from beginner to GM while offering numerous features to help you learn and improve as you play with HIARCS. A very advanced set of coaching assistance is now present to help players of all strengths improve their chess play while having fun.

HIARCS Chess for iPad has a full range of realistic weaker opponent strengths and playing styles catering for all players from absolute beginners to professional Grandmasters. On the weaker playing levels HIARCS will make human-like mistakes appropriate to the level of play and this together with the integrated coach advice, assessments and alerts allow you to learn and improve quickly. HIARCS can even adjust its playing strength as you improve and learn more.

HIARCS Chess for iPad is even able to save battery life by using much less energy on any weaker levels, allowing more playing time on long journeys etc.

HIARCS has a large tournament book which is right up to date with chess theory in summer 2011 with hundreds of thousands of positions, moves and variations, in fact there are over 235,000 variations! The book moves are displayed on screen with chess symbols and the opening variations are even named.

HIARCS Chess for iPad also monitors your chess performance and provides you with an Elo chess rating which tracks your chess ability in every game.

Get HIARCS Chess for iPhone on the App Store

A discount coupon is included with the product offering up to $10 USD discount on other HIARCS products for Mac, PC, Palm and Pocket PC on www.hiarcs.com.
Discount cannot be used in conjunction with any other promotion or discount.

"The playing program is good. It is good enough to beat 99.9% of chess players on this planet....It gives an excellent entertainment and educational value...On the scale of 1 to 10, I give it a 9.5. Well done!"
- review of HIARCS 12.1 iPhone Chess by Susan Polgar, former Women's World Chess Champion and award-winning chess author.


January 2013 - updated features in the new version (compared to the previous version 13.3)


Updated features in the new version (compared to the previous version 12.4):

I would like to thank the following people whose content has been included with HIARCS Chess 13.6 for the iPad. Special thanks goes to Tord Romstad for his excellent GUI framework without which this project would of been much more time consuming.

VCR icons used with thanks from The Working Group blog under the Creative Commons Attribution-Share Alike 3.0 Unported license